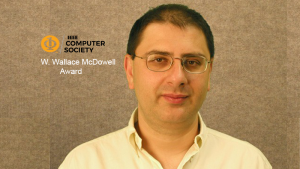 Rafail Ostrovsky, a distinguished professor of computer science at the UCLA Samueli School of Engineering, has received the 2022 W. Wallace McDowell Award from the Institute of Electrical and Electronics Engineers (IEEE) Computer Society for outstanding recent contributions to computer science and engineering.

In selecting Ostrovsky for this highly coveted award, IEEE recognized his “visionary contributions to computer security theory and practice, including foreseeing new cloud vulnerabilities and then pioneering corresponding novel solutions.”

The award comes on the heels of two other accolades for Ostrovsky in January. He was elected as a 2021 fellow of the Association for Computing Machinery (ACM) for “contributions to the foundations of cryptography” and as a 2021 fellow of the American Association for the Advancement of Science. AAAS, which is the world’s largest scientific society and publishes the journal Science, selects its fellows based on their distinguished efforts to advance science or its applications. Ostrovsky was one of four UCLA faculty members in the 2021 class.

Since joining the UCLA faculty in 2003, Ostrovsky has advised 28 doctoral students and supervised seven postdoctoral scholars. He is also the director of the interdisciplinary Center for Information and Computation Security.

Among some of Ostrovsky’s previous honors are the 2017 Technical Achievement Award from the IEEE Computer Society and the 2018 RSA Conference Award for Excellence in Mathematics. A foreign member of Academia Europaea, Ostrovsky has also been elected a fellow of IEEE and the International Association for Cryptologic Research.