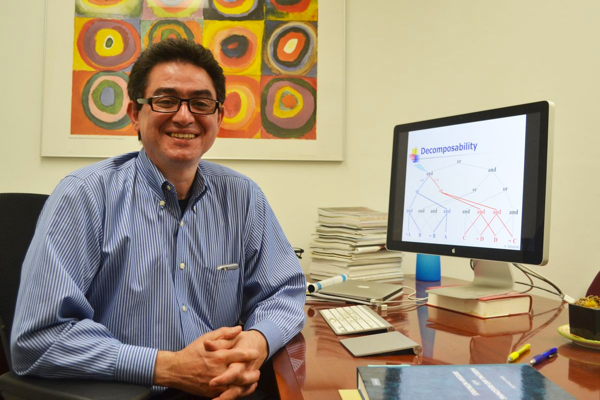 Every year, the school of engineering awards the Lockheed Martin Excellence in Teaching Award to a senior faculty member in the School of Engineering with a proven track record of offering students the best possible education through innovative and inspirational teaching methods, curriculum development, and support of student academic efforts. This year, computer science professor and computer science chair Adnan Darwiche was the recipient of the 2018 Lockheed Martin Excellence in Teaching Award.

When asked about his feelings towards receiving the award, Darwiche expressed his excitement, saying, “I feel great – the award is based on students’ feedback, in addition to support from colleagues. It is a statement of recognition and appreciation by both students and colleagues, which makes me very happy.”

Darwiche originally began his education in civil engineering, getting his B.S. from Kuwait University in 1987 and then joining Stanford as a computer aided civil engineering MS/Ph.D. student. During his first year at Stanford, Darwiche decided to switch his focus to computer science, and consequently received his MS and Ph.D. in computer science from Stanford in 1989 and 1993 respectively. Darwiche later joined UCLA as a postdoctoral researcher with professor Judea Pearl and then, after spending some time in industrial research, returned to UCLA as a faculty member in 1999.

Darwiche’s research lies mainly within the realm of artificial intelligence, with a focus on automated reasoning and machine learning. His current research interests lie in AI systems that are based on both knowledge and data, and systems which combine both symbolic and numeric AI methodologies for reasoning and learning. This passion for research, Darwiche says, is one of the things that eventually made him want to become a professor.

“As a professor at a top research university, I get to think about and pursue research problems that I find interesting,” Darwiche said. “[However], doing research is not only about producing results, but also about understanding things. When writing research papers, I mainly communicate results. When teaching, I get an opportunity to share my understandings with students. Without teaching, the investment one makes in understanding things is largely kept within. But with teaching and mentoring, it is spread to students who are seeking to understand things themselves.”

When asked about his approach to teaching, Darwiche further emphasized the idea of spreading knowledge to his students. “For me, teaching is about sharing what I know with students, so I make sure to share my insights and perspectives with them. I also don’t expect them to master all details, but to comprehend and break into a core of knowledge that is sufficient for producing the details. [Nowadays], since it is quite easy to look things up due to the massive knowledge available online…students are mostly in need of insights and perspectives more than anything else.”

Darwiche also touched on the somewhat controversial topic of making lectures available online. “For a while, I resisted posting my lectures and talks online, but about a year ago, I had a change of heart on this and found it very rewarding,” he said. “First, it allowed me to share my thoughts and understandings beyond students that take my classes. Second, the lectures I give are now more lasting in their impact – even students who take my classes find it useful to revisit the lectures. I recently took this a step further by starting a YouTube Channel, where I post my lectures and talks. I am now even more encouraged to invest in teaching as it has become more beneficial to others.”

Read more about Darwiche and his work here, and find his lectures online at his YouTube Channel, accessible here.