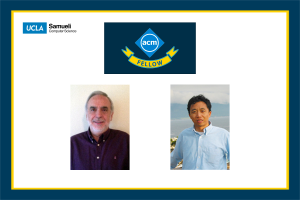 Professors Songwu Lu and Carlo Zaniolo were elected as ACM Fellows. This is ACM’s highest honor and only given to around 1% of ACM Members. ACM honored Professor Zaniolo for his significant contributions to theory and practice of Data Bases and Knowledge Bases and Professor Lu for his contributions to the resilient 3G/4G mobile cellular networks, particularly their software protocols and network analytics. This brings the UCLA Computer Science Department’s official count of ACM Fellows to 13, IEEE Fellows to 16, and AAAI Fellows to 3.